Herb Silverman
Candidate Without a Prayer 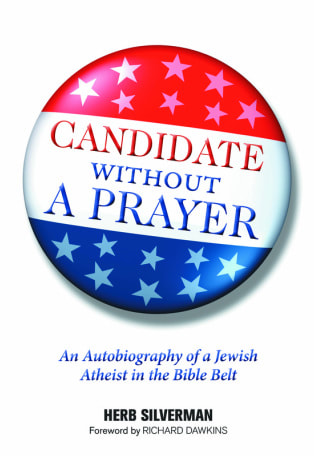 In this deeply revealing and engaging autobiography, Herb Silverman tells his iconoclastic life story. Equal parts Bertrand Russell, Woody Allen, and Elizabeth Cady Stanton, he takes the reader from his childhood as an Orthodox Jew in Philadelphia, where he stopped fasting on Yom Kippur to test God’s existence, to his adult life in the heart of the Bible Belt, where he became a legendary figure within America’s secular activist community and remains one of its most beloved leaders.

Never one to shy from controversy, Silverman relates many of his high-profile battles with the Religious Right, including his decision to run for governor of South Carolina to challenge the state’s constitutional provision that prohibited atheists from holding public office, and his experiences facing Christian fundamentalists of all stripes in open debate. He is equally candid about the battles he has faced in the secular community itself and the many hurdles he overcame in the historic step of politically uniting the country’s major secular, humanist, and atheist groups under the banner of the Secular Coalition for America.

Silverman combines a satirist’s pen with an activist’s passion, revealing in humorous and often moving ways a personal side few know. Famous for dispatching his opponents and those who might question him with a few carefully chosen words, here he disarms with refreshing candor about his own foibles and flaws, and unabashed honesty about his work and life.

With a voice that crackles with effortless wit and with prose that reveals deep, often hidden wisdom, Candidate Without A Prayer offers an intimate portrait of a central player in today’s increasingly heated culture wars. It will be sure to charm both believers and nonbelievers alike, and will lead all those who care about the separation of church and state to give thanks (if not a prayer) for Silverman’s many gifts to humankind and America’s future.

An entertaining and informative look at America’s culture war from a writer who has been embedded in the front lines.
Steven Pinker, Harvard College Professor of Psychology, Harvard University, and author of The Better Angels of our Nature.

Iconoclastic atheist, humorist, and mathematician Herb Silverman takes you on an entertaining tour of his irreverent life, so far.
Wendy Kaminer, lawyer, social critic, and author of seven books.

Herb Silverman’s autobiography is not an anti-theological treatise.  It is, however, a warm, deeply personal and inspiring tale of one atheist’s travels through life in one of America’s most religion-drenched regions.  Silverman “plays well” with believers and non-believers who share this core belief: no government official dare treat a person as a second class citizen because of what she or he believes about God, gods, or the non-existence of them.
Reverend Barry Lynn, Executive Director of Americans United for Separation of Church and State

It isn't often that inveterate honesty and inviolable reasonableness are combined with such a sweet disposition and a wonderful sense of humor. Those who don't yet know Herb will find in this wonderfully entertaining tale of how he became a fighting atheist a man of true wit, true warmth, and true wisdom.
Rebecca Newberger Goldstein, author of 36 Arguments for the Existence of God: A Work of Fiction