Herb Silverman
An Atheist Stranger in a Strange 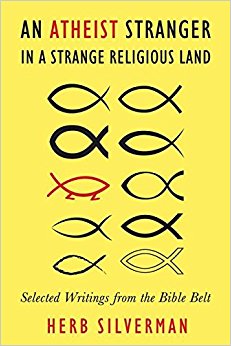 About the Book
From Orthodox Jewish child in postwar America to mild-mannered mathematician in academia to legendary atheist activist in the heart of today’s Republican South, Herb Silverman has always been outside the mainstream of American culture, politics, and religion. From this unique vantage point, he writes about the most pressing issues of our day, including those related to war, peace, patriotism, race, gender, and church-state separation. In this entertaining and thought-provoking volume, he curates some of his best written work. Silverman may see himself as an atheist stranger in a strange religious land, but thanks in part to his work as activist and author, atheists as a whole are no longer strangers in this increasingly irreligious land.

About the Author
Herb Silverman is Founder of the Secular Coalition for America, and Distinguished Professor Emeritus of Mathematics at the College of Charleston. He is author of Candidate Without a Prayer. You can browse a collection of Herb’s public speeches and debates at his Website http://www.herbsilverman.com
Atheist Stranger in a Strange Religious Land is available in print, ebook, and audiobook, and may be purchased here.


Praise for Atheist Stranger in a Strange Religious Land

“In the rationalist utopia of my dreams, Herb Silverman would be a living national treasure, if not Honorary President for Life.”
Richard Dawkins, author, The God Delusion

“Herb Silverman's writing is like listening to a favorite uncle give entertaining yet practical advice on how the world really is. Herb's mathematician side comes through in the flawless logic he uses to filet arguments in support of religion and against atheism. His puckish side comes through in the jokes and storytelling that make his enjoyable commentaries part cultural observation, part Borscht Belt routine. This volume takes us inside Herb's mind —a place to linger only if you want to be challenged to think while chuckling.”
Robyn E. Blumner, President & CEO, Richard Dawkins Foundation for Reason & Science

“These lively and thoughtful essays contain essential insights on how to advance a secular, humanistic worldview in a country and a world that is still dominated by religion. The discussions are invariably judicious, wise, and thought-provoking.”
Steven Pinker, Johnstone Professor of Psychology, Harvard University; author, The Better Angels of Our Nature

“What I like most about Herb Silverman’s eclectic collection of essays, on subjects ranging from holidays to the political clout (and weaknesses) of atheists and secular humanists in politics, is his emphasis on building coalitions with liberal religious allies when we agree on public issues and drawing the line when secular and religious values clash. There is uncommon good sense—sorely needed in this era of political incivility—in his insistence that it is both possible and desirable for atheists and humanists to proudly proclaim their values while seeking areas of common concern with the large number of liberal religious Americans who agree with secular Americans, not with the religious Right, on the separation of church and state.”
Susan Jacoby, author, Freethinkers: A History of American Secularism

“An Atheist Stranger in a Strange Religious Land doesn’t only give us the best of Herb Silverman. Its delightful mix of incorruptible reason, tolerance, and compassion—served with a deliciously saucy sense of humor—gives us the best of humanity.”
Rebecca Goldstein, author, 36 Arguments for the Existence of God: A Work of Fiction

“With wit, warmth, and insight, Herb Silverman deftly addresses a range of topics relating to religion, atheism, politics, and culture, and the sometimes uneasy relationships among them. His delightfully concise essays will bring enlightenment to your brain and a smile to your lips.”
Ron Lindsay, author, The Necessity of Secularism: Why God Can't Tell Us What to Do

“Herb Silverman has the unique gift of advocating atheism while simultaneously disarming his critics. He prefers intelligence over insults, prose over polemics, and conversation over conversion. He has spent his activist career bringing people together to advance our common goals of and atheists everywhere owe him a debt of gratitude for it. In this book of essays, you get the taste of that Southern godless charm that has made him a popular draw for religious and nonreligious people everywhere.”
Hemant Mehta, editor of FriendlyAtheist.com and author of I Sold My Soul on eBay

“Whether you believe in God or not, you can have faith in Herb’s Silverman’s ability to inform and entertain. He is an insightful and delightful conversationalist, as this collection of his columns confirms.”
Wendy Kaminer, author, Sleeping With Extra-Terrestrials

“Whenever I see that Herb Silverman has written about something I care about, I drop everything and read it. This collection reminds me why. More than once, his clarity, intelligence, and easygoing wit have been the perfect antidote to the lunacy of our culture war, making me feel that things just might turn out fine after all.”
Dale McGowan, author, Parenting Beyond Belief
​